Posted by The Elegant Astronaut at 12:29 PM No comments:

Posted by The Elegant Astronaut at 1:37 PM No comments:

Email ThisBlogThis!Share to TwitterShare to FacebookShare to Pinterest
Labels: 2016, 2017 has got to be better, Prince, Trump

Posted by The Elegant Astronaut at 8:13 PM No comments:

As hard as it was to watch the real second Presidential Debate, the SNL skit that followed was pure gold. Thanks to my friend Nathan for showing it to me.
Posted by The Elegant Astronaut at 7:22 AM No comments: 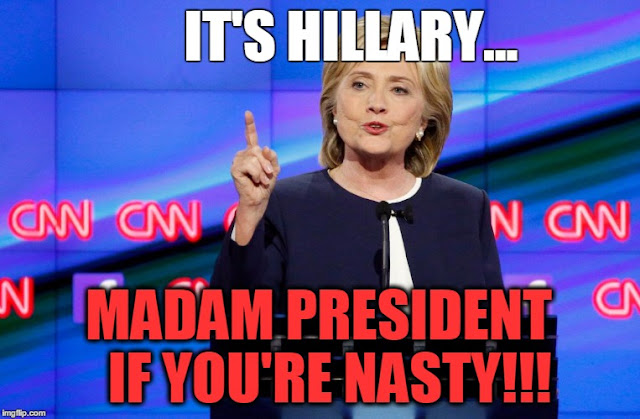 The third and final Presidential Debate was arguably the best one between candidates Donald Trump and Hillary Clinton, largely due to Chris Wallace's mastery at being a tenacious and well-prepared moderator. I was nervous about the debate, considering how tense and unprofessional the second debate had been. When Donald Trump becomes unglued, he appears to be capable of nearly anything. His physical lurking behind Hillary at the second debate was unnerving and inappropriate on all levels. Near the end of the final debate last night, Hillary once again showed the world how very capable she is at staying calm and measured in the face of a brutal storm. Trump, who was apparently aware that Hillary had cleaned his clock for the third time in a row, called her "such a nasty woman" after she jabbed him rather craftily in her statement about taxes and social security. I'm sure Trump's last handful of fans cheered loudly when he said that, and Hillary gained a new following of "nasty" women!
Posted by The Elegant Astronaut at 1:36 PM No comments:

You're Scaring The Women And Children, Donald Trump


This debate was hard to watch. It was tense, unsettling, and frightening. I noticed people in the audience, including Trump's wife and daughter, looked scared at times.
Trump was in full-attack mode, which has probably always served him well in the past. I am surprised Hillary managed to hold herself together as well as she did. She definitely took the "high road" most of the night.
In light of Trump's most recently uncovered bad behavior, debate moderator Anderson Cooper minced no words when he asked Trump if he was really bragging about sexual assault when he said on tape years ago, "Grab them by the p___y." Trump repeatedly stated that it was just "locker room talk" and then he started talking about how horrible ISIS is.  (Seriously?)
Trump attacked Bill Clinton, who looked kind of sad sitting up in the balcony. Some of the Clintons' ghosts from the past even sat together at the debate (Kathleen Willey, Juanita Broadderick, and Kathy Shelton), presumably to show support for Trump.
Clinton stayed impressively calm throughout the 90-minute "scorched-earth debate", as CNN called it. Trump's body language was aggressive enough I wondered if he'd actually hit Hillary.
Trump is losing and he knows it. His gloves were off, and he went for Hillary and Bill's throats. He reminds me a little of the Hulk. When things aren't going the way he wants them to, Trump gets mad and TRUMP SMASH!!!! TRUMP SMASH HILLARY!!!

Posted by The Elegant Astronaut at 10:29 PM No comments:

Did We Already Find Life On Mars?

Posted by The Elegant Astronaut at 11:57 AM No comments:

Why Aren't We Looking For Life On Mars?

"It is unfortunate that the Mars 2020 rover currently being developed by NASA has no experiments designed to detect living organisms on the Red Planet. It will be looking only for "signs of past life." Gilbert Levin's Labeled Release (LR) Experimental Data was indicative of active metabolism in the Martian regolith during the Viking I and Viking 2 Lander missions in the 1970s. The Viking LR data was dismissed as due to unexplained "alien chemistry" rather than biology. Even though all efforts to replicate the Viking LR data by abiotic means have failed, not a single subsequent NASA mission to Mars has searched for living microbes or evidence for ancient life. Subsequent NASA, ESA and Russian missions have established that there are vast amounts of near surface water ice and permafrost even at mid-latitudes on Mars. It is now known that on Earth microorganisms do live and grow in polar ice and permafrost. Hence there is no valid scientific reason to dismiss the Viking LR results. In consideration of Planetary Protection Protocols it is of profound importance that experiments designed to search for indigenous life on Mars be carried out before the Red Planet is hopelessly contaminated by a manned mission."


-Astrobiologist Richard B. Hoover
August 29, 2016
Posted by The Elegant Astronaut at 1:57 PM No comments:

Dinner With Doctors (the Ph.D. kind) 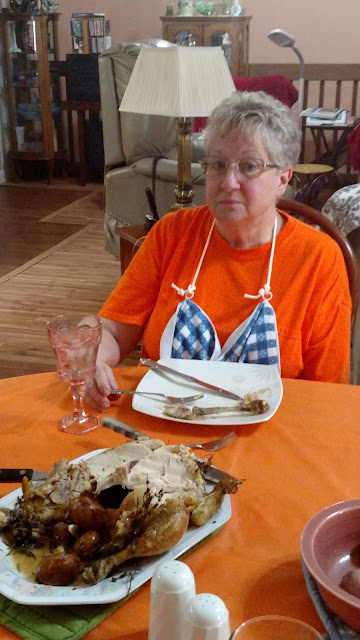 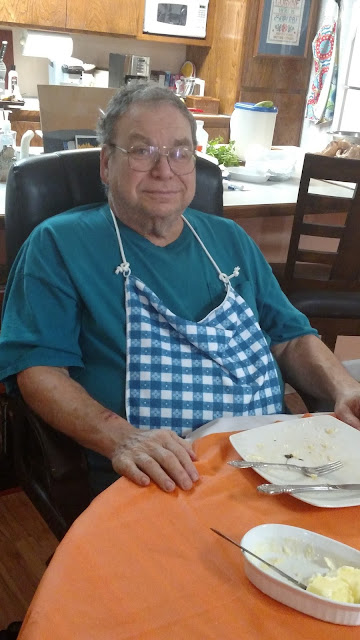 "Balanced meals
are a bitch."

"I would think one could live quite nicely on oatmeal cookies."

-Dr. Bill B.
Posted by The Elegant Astronaut at 8:23 PM No comments:

Posted by The Elegant Astronaut at 4:54 PM No comments: 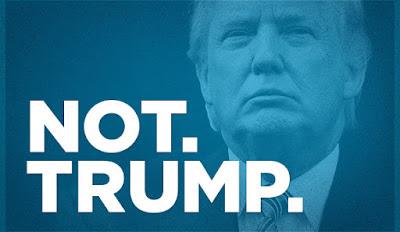 Posted by The Elegant Astronaut at 3:26 PM No comments: 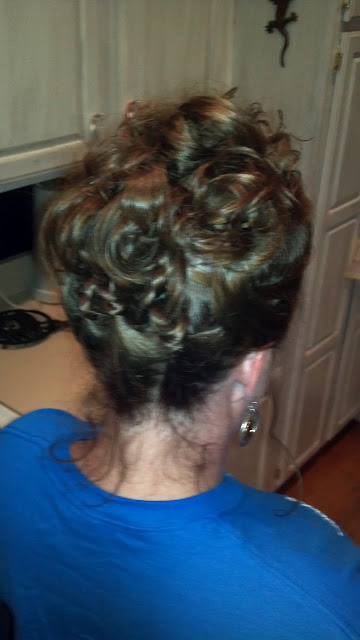 Have you ever seen anyone at the grocery store, or maybe IHOP or the Cracker Barrel in the morning, and you could tell they were still recovering from a GREAT party the night before? They may not be dressed well, or they might have smeared make-up left on, but the tell-tale sign is their HAIR. Their fabulous, messy, over-sprayed, pinned up, tousled hair. You usually have to pay someone to do a great up-do for you. And normal people don't wear up-dos unless they are going to a wedding, a prom, or some big party where they want to look their BEST.
I went to a party like that last night. Eight doctors had just graduated from a 3-year-residency program. It was a grueling and emotionally abusive process, according to my friend Nathan. He did not try to hide the anger in his graduation speech.
I joined his family at the ceremony, which was hosted at the Movie Lounge in Fort Smith, Arkansas. There were more than 200 people present, and half of them were decked out in formal gowns and dresses. Aunt Frances and I were excited to be there, although Nathan was less enthusiastic.
Besides Nathan's angry speech, the most other noteworthy event happened during another graduate's speech. The young doctor from New York mentioned one of the residents who had been kicked out of the program, and he poured part of a beer onto the podium in his honor (???). I'm not sure where that idea came from, but Nathan said he'd probably get yelled at for it later. (That same New York doctor yelled "To Valhalla!" near the end of Nathan's speech.)
The Movie Lounge had a really nice bartender, and I asked him to recommend a good girlie drink. He made something called "The Mob Wife" for me, and it was DELICIOUS! It had orange juice and amaretto in it, and I'm going to call him to see if I can get the rest of the ingredients. I let Nathan try it, and he said that was the highlight of his night.

Posted by The Elegant Astronaut at 10:32 AM No comments:

If I Had A Kid, This Would Be Him/Her

Posted by The Elegant Astronaut at 5:13 PM No comments:

Dispatch from the Gulf Coast

Why am I blogging when I could be fishing? Actually, it is pouring down rain outside, so that is why I am sitting here in the cafeteria at the Gulf Coast Research Lab (GCRL) in Ocean Springs, Mississippi. A young girl in a sweatshirt just came in cursing because the room is cold.

Every summer, I travel with a group of college students here. I have never been to a facility like this anywhere else. It is literally a college campus on the ocean. They have dorms, and "cottages" (think FEMA trailers), and a small house for students and faculty to rent.

Aside from the cafeteria, they also have a library, and a museum full of strange saltwater creatures in jars and barrels. (The barrels are not see-through. Personally, I find this terrifying.) There are permanent-looking brick building labs for scientists and graduate students to do research, and several research vessels (boats) for field studies out in the Gulf.

Their newest boat addition is the R/V Jim Franks, and I was desperate to see it. The boat we usually take out is the sixty-something-year-old Hermes, so seeing a brand new research vessel is kind of a big deal. (Research boats remind me of Jacques Cousteau's Calypso, and there aren't many things cooler than that!)

I was not able to go out on the Jim Franks, but I was happy to get on board and take pictures while it was docked at Point Cadet in Biloxi. The boat cost more than 2 million dollars, and the man it was named for was very humbled by the honor. I found Mr. Franks on campus and asked him about his boat. "It looks like a little battleship," he told me. There are 8 beds on board, and it would be suitable for a 48-hour trip. There are two bathrooms, but no showers. Researchers from the GCRL had already taken the boat out to Horn Island that week.

Our students, most of whom were majoring in fish and wildlife biology, became very adept at catching crabs and fish near the campus.
One of the most dreaded activities we do is the 24-hour diel study, where every 5 hours we take seine nets and kicknets and comb the water for any sort of creatures that we can catch. Since this is an ecology class, the students must identify everything from the nets. Over the years, I have seen several sharks (albeit small ones) caught from the main pier we use for our collections. NO ONE wants to get in that murky water at night, but we do it at 11:00 pm and at 4:00 in the morning. We were scared. We started singing the popular "Hell 2 Da Naw Naw" song as we waded through the dark water with our nets.

I absolutely love this class. I think it is the best undergraduate class a biology student can take. Learning how to effectively sample the ocean and how to identify all the different life forms you see inherently makes you appreciate the diversity of life and the delicate balance we have with them.

Posted by The Elegant Astronaut at 12:23 PM No comments:

Who Will Be Our Next President?

Posted by The Elegant Astronaut at 10:16 AM No comments:


"Luckily, I'm a botanist. Mars will come to fear my botany powers."

Posted by The Elegant Astronaut at 3:42 PM No comments:

Posted by The Elegant Astronaut at 1:48 PM No comments: