The Secret Life of a Submariner 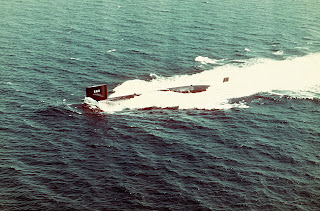 Not many people get the opportunity to live and work inside a real submarine. I remember watching a Navy officer give a presentation at my college in 1996. I asked him about life on the submarines, and he pointed out that women weren't allowed in the program. I didn't give submarines much thought after that. (Why bother?)
Many years later, I met George Baer, a former nuclear-trained electronics technician (reactor operator) from the Navy. He served on a Sturgeon-class attack sub (SSN-660) from January 1974 until November 1976. When I asked about his experiences aboard the impressive deep-water metal death machine, he summed it up in one word: "cramped."
The submarine, named the U.S.S. Sand Lance, had one propeller (called the "screw" by the sailors), which was driven by a S5W nuclear reactor and two steam turbines. The screw had 7 blades, although a 5-blade screw could propel the submarine faster. The reason was simple: "The whole thing about submarines is stealth," explained Baer. A 5-blade screw cavitates more than a 7-blade screw, which would make more noise underwater. Cavitation is a phenomenon you may remember from the book or movie, The Hunt for Red October. It refers to the creation and collapse of air bubbles by the screw, which can be pretty noisy. Silence apparently trumps speed when it comes to underwater maneuvering. Submariners go to such efforts like using paper plates instead of regular plates to avoid any unwanted attention. (FYI: The Hunt for Red October is actually "very accurate" technically, according to Baer. "Scary accurate," he said.)
Different types of submarines make different noises underwater. "It's like a fingerprint," said Baer, and it is one of the responsibilities of our military to keep records of these different, identifiable noises. There is sonar equipment located "all over" the bottom of the ocean floor, and Big Brother is listening!
The Sand Lance's top speed was about 30 knots, or 34.5 mph if it had "a clean hull." The accumulation of barnacles and other marine life cause drag and slow the sub down if it was not regularly maintained. Submarines can also move "considerably faster submerged" than they can at the water's surface due to the reduced amount of surface tension, said Baer.
One of the Sand Lance's missions was to deter enemy subs away from other U.S. subs that has ballistic missile capabilities. Baer said it was referred to as "De-lousing the boomers." The boomers were the ballistic nuclear submarines. Baer's sub and a boomer would leave an area at the same time. The boomer would "go silent," and Baer's sub would "not go silent" so the Russians would follow Baer's sub instead.
Baer remembers a particularly alarming "cat-and-mouse chase" with a Russian Alpha-class submarine in the Mediterranean Sea. Baer's sub was cruising along 300 feet below the surface when the Russian sub was detected. Baer said he and his crewmates could tell something strange was happening when they started to maneuver to the side, and when their boat started to dive deeply. There was a CIA officer (a "spook") on board who was disguised as a first class petty officer. (He spent an awful lot of time hanging around the captain, and he was staying in the Executive Officer's state room, which sort of blew his cover, according to Baer.) The spook was advising the captain on how to maneuver during the chase, which lasted a couple of hours. At one point, the Russian sub "pinged" Baer's sub. The sonar waves used by submarines are loud enough to be heard with naked ears. But, if stealth is key when it comes to submarine etiquette, why would the Russians make such a conspicuous move? "They were pissed off because they knew we were following them," explained Baer. The Alpha-class Russian sub could out-run and out-maneuver the Sand Lance. The spook on board advised to captain to elevate back to 300 feet and "just ignore" the Russians. His advice was heeded, and the Russians eventually "got bored and left," said Baer. Attack by torpedoes was not the Americans' main concern. "Our biggest concern was collision," said Baer. The navigation officer told him later that they had "zero bearing" with the Russian sub at least three times during the chase. That meant that the subs were directly on top of each other, but at different depths. If they had both been at the same depth, collision would have been inevitable.

The sonar used by Baer's boat was actually a 50,000 watt sound wave, which would surely kill any living thing it hit at a close distance. "It would crush your bones," he said, noting that it could be the cause of harm done to large sea creatures like whales that seem to wash onshore sometimes "for no reason."
Baer once conducted a neat demonstration to show how much the hull shrinks when the submarine dives to its maximum depth. While they were at 300 feet, he tied a piece of string across one of the widest parts of the sub (in the machinery room.) It was taut at about four feet from the deck. After the boat dove to 1300 feet, he checked the string, and it was sagging to less than a foot from the deck.
"Most people don't realize when you've been on a sub for two or more weeks, your eyes adjust to short distances and you've lost your distance (vision)," said Baer. He said it takes a while for your eyes to be able to focus on things farther than 30 feet away. "Everybody wears sunglasses because you're not used to the sun - you're used to fluorescent lighting. I was flipping out," he said.


Baer recommends reading the book "Blind Man's Bluff" for anyone who would like to learn more about life on a submarine. As far as women serving on subs, his only comment was, "I don't know why any woman would want to be on there."

Posted by The Elegant Astronaut at 2:45 PM No comments: 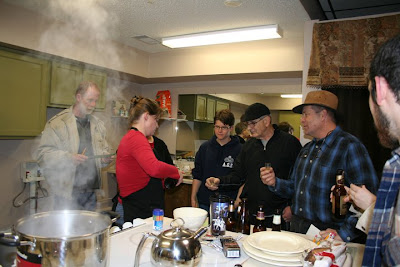 Friends, lovers, co-workers, husbands and wives, bosses and landlords all came together to enjoy a night of beverage tasting at my apartment. It was a joyous evening, and a great excuse to bring people together.  I enjoyed it so much, I plan to turn this into an annual event.
Posted by The Elegant Astronaut at 8:01 PM 1 comment:

Multiple sources have indicated that he plans to move to...Idaho. (?)
After inventing as many new aircraft as he has (nearly one per year since 1982), and after kick-starting America's commercial space industry with his revolutionary X-prize winning space flights in 2004, it's hard to imagine Burt anywhere but working hard in the California desert.
Best wishes to you, Mr. Rutan! It is a well-deserved retirement, although your presence will be missed.
Posted by The Elegant Astronaut at 1:14 PM No comments:

"I write for myself and strangers."


-Gertrude Stein
Posted by The Elegant Astronaut at 8:30 AM No comments: