On Presidents, Cogs, and Quinceaneras

I feel certain Hillary is going to be our next President. As Madeleine Albright said, "she's the best prepared." Well, no joke! Former First Lady, former Senator, former Secretary of State. Thomas Jefferson was our very first Secretary of State who later became President. (My father would kick a hole through his coffin if he heard me make that comparison. He worshiped Thomas Jefferson and made regular pilgrimages to Monticello. He despised the Clintons, for reasons I could never understand.) Why not Hillary? You don't like her? I saw that book about her with the title, "Unlikeable," but I didn't buy it. I don't want to read about someone else's hate. I want to be inspired! I want to try harder! I want to be elevated to levels I never thought I could reach. I WANT TO SEE A LADY BECOME THE MOST POWERFUL PERSON IN THE FREE WORLD! I don't want to read some white man's lament about how a woman has out-performed him in this life. Yeah. I'm talking to YOU.

I went to my first Mexican Quinceanera party this week, for my teaching assistant's little sister. I could not believe how much money was poured into this event! Talk about making a 15-year-old girl feel like a princess. She had a gorgeous formal gown, hired DJs and several videographers who were recording everything. The dance floor had flashing colored lights and smoke effects. She had a HUGE, multi-tiered cake that would rival anything I've ever seen at an overdone wedding. There was a very large, full-color portrait of the girl in her beautiful formal gown, with glamorous make-up and a stunning hair-do in the entrance hall. She wore a tiara in her portrait and at the actual Quinceanera, just in case you weren't sure who the princess was! "It's like a wedding for one person," my teaching assistant told me. All of the girl's friends and family were there, partying the entire afternoon until midnight. Every chair was covered in white fabric and had a big satiny bow in the main color of her party's theme: light teal. The champagne glasses were adorned with satin bows and little flowers and they had her name embossed in silver on them. Even the champagne bottle was dressed up in a way I've never seen before (see pic below.)

That girl has to know how much her family loves her! What a wonderful tradition. I've heard about southern debutante balls, but I've never been to one. I don't even think they are/were as popular as the Latino Quinceanara. Kudos, Latinos!!  You definitely win the prize for celebrating young women and making them feel important and loved.  I feel sad that Americans truly have no cultural equivalent coming-of-age celebration for their girls.

In this same week, I was reading about female genital mutilation in Africa. It is apparently on the decline, but it still performed on a large number of women. Female genital mutilation is a much different type of cultural practice that involves using a razor blade or glass or some other barbaric sharp object to cut out the clitoris and sometimes the inner labia of girls WHILE THEY ARE FULLY CONSCIOUS! Why, you ask? Why do this? Since the clitoris has no other function than pleasure (it is FULL of nerves, allegedly twice as many nerves as the glans of the penis), I think the take-away message is that woman are not supposed to enjoy sex. The removal of the inner labia is even more mysterious, since, even as an anatomy professor, I cannot guess at what could be offensive about them. The delicate inner labia are somewhat like an adornment to the vagina, so the removal of them as well as the clitoris (at least from the VIEWER'S perspective) is like reducing the woman's anatomy to a HOLE, as if to say, "This is what you are to society, woman. You are a HOLE, meant for service and reproduction without pleasure." Talk about being a cog in the wheel of misery. Here is a map of where female genital mutilation occurs in the world:

The injustice of it all is maddening. Why can't girls in Africa be allowed to keep all the parts they are born with? Why can't all young women be celebrated as they are with the Latino Quinceanara? Why can't we have a brilliant, educated, over-qualified woman serve as President of the United States?

As long as women are thought of as COGS in a bigger wheel, they will always be subjected to varying forms of abuse. Women's rights ARE human's rights, and it is ludicrous to think of it any other way.

I'm going to vote for Hillary. I don't care if my father kicks his way out of his coffin. Thomas Jefferson was no saint, not with his dealings with his slave Sally Hemings. She allegedly gave birth to six of his children, and yet he never released her. (Jefferson's all-white daughter Martha did give Sally her freedom after he died.) Do you think Sally ever felt like a COG in the Great Thomas Jefferson Wheel?

I think I'm going to go plan out a cuarenta party for myself next year.

Posted by The Elegant Astronaut at 9:46 PM No comments: Links to this post

If You've Ever Been A Dungeon Master...

Then this will probably mean something to you! 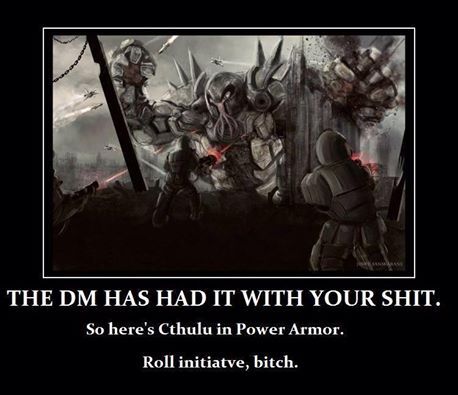 Posted by The Elegant Astronaut at 11:13 PM No comments: Links to this post

Thank you, Ozuro, for this wonderful cheat sheet! I am particularly fond of the treasure chest with teeth.

Posted by The Elegant Astronaut at 3:04 PM No comments: Links to this post