Return from the Gulf 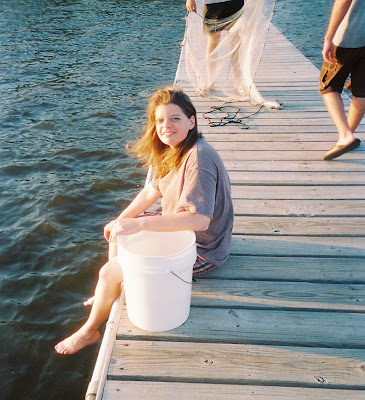 My favorite place on Earth: Pier One at the Gulf Coast Research Laboratory
Ahhhhh...my sunburn is gone! The laundry is washing, my cat is fed, and there are clean sheets on my bed. I am back from a week-long visit to the Gulf Coast. My school offers a summer speed-course called "Coastal Ecology" for biology majors. It is a wonderful alternative to our traditional, computer-based, heavy-into-statistics ecology course.
The coastal class is only three weeks long, and the field portion is held at the Gulf Coast Research Laboratory (GCRL) in Ocean Springs, Mississippi. My school has had a partnership with the GCRL for many, many years, and we usually bring a group of 10 to 15 students down each summer.
One of the highlights of the trip is the venture to Horn Island, a pristine wildlife sanctuary that boasts white sand and beautiful beaches. No man-made structures whatsoever. It only takes a little more than an hour to motor out to the island, then we usually spend a few hours on the island, and we troll on the way home (8 hours in the water-reflected sun - hence the sunburn.) This time, there was a snafu with our packed lunches, but the Larry-the-ever-awesome-captain ran to the store to get us fruit, drinks, and sandwich items. I asked for coffee, and Larry explained that the boat's generator was out, so he couldn't make any. Then he promptly got a cup and poured me some coffee from his own mug. I've never met anyone that nice.
During the trip, I asked Larry if I could get a picture with him. He not only complied, but he handed me the wheel! I guided the Hermes up the channel, listening to Larry and the first mate as they told me which poles to stay between. After a few minutes, I saw a dolphin jump out of the water and I screamed, "There's a dolphin!" Larry took the wheel back so he could turn around and make the dolphin chase us. One of our students took excellent pictures of it jumping in and out of our wake.
We caught some fairly large shrimp while we trolled on the way back from the island. One of our students cooked us a nice meal of shrimp and little red potatoes drizzled in butter and Worcestershire sauce one night.
I spent many nights out on the large pier in front of the GCRL. I met many people visiting from other schools, and I particularly enjoyed talking with a shark researcher and some of his students from the University of New England in Maine. We sat for hours, baiting our hooks with gulf menhaden and shrimp, and catching sand seatrout and hardhead catfish. The students were here for a fish physiology course, and they needed gafftopsail catfish and the seatrout for their lab experiments.
I had met a different shark researcher earlier at the GCRL. I was pretty excited to find out that there are new satellite tagging capabilities that transmit real-time data from sharks as they go about their daily business. Apparently, we know nothing about sharks! One shark that had been tagged was in the dark for more than 24 hours, so the researchers could tell that it had been eaten by another shark! One hammerhead that had been tagged swam down to a depth of nearly 1000 feet, and did this several times in one day. The researcher said that no one had any idea that a shark could acclimate so quickly to such a rapid change in pressure. The future of shark research is "understanding their biology," I was told. Sounds pretty exciting to me!

After two days of fishing and seining, one student said, "every student from Tech should take this class. They'd be hooked," he said. I completely agree with him.
Posted by The Elegant Astronaut at 8:40 PM