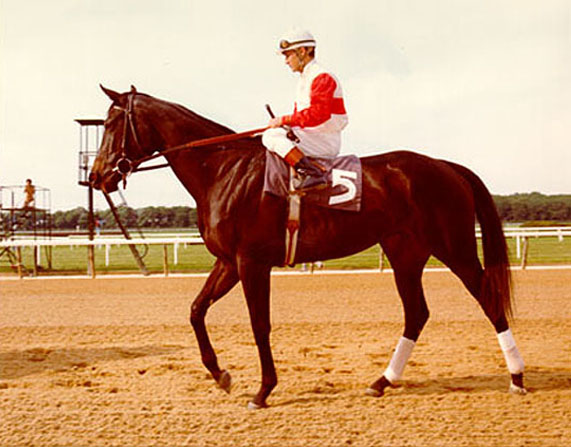 I've been depressed all day. I saw real video footage of a 3-year-old filly break her leg open on a racetrack and try to keep running on it.

This horse, named Ruffian, was born to race. Her father was a half-brother to the mighty Secretariat, and Ruffian, true to her blood, never lost. She had a perfect 10-0 record. In every race, Ruffian would sprint out of the gate to the front of the pack, and continue to distance herself from the other horses. She was absolutely phenomenal!


Ruffian's jockey, Jacinto Vasquez, said she had an aura about her, "like Marilyn Monroe, or Raquel Welch." She was tall, elegant, and glistening black. She was everything a race horse should be, and she was insanely popular.
Ruffian's eleventh race was a match against a Derby-winning colt named Foolish Pleasure. This was the first time she would race against a male horse. Ruffian's trainer, Frank Whiteley, was apparently not a fan of match races. Two thoroughbreds racing together will sprint at top speed for the entire mile and a quarter of race track. This is very dangerous for the animals, who are competitive by nature. Whiteley said in an interview that Ruffian's owners told him they would "have to do this sooner or later."
This equine "Battle of the Sexes" between the top two horses in the nation drew thousands of spectators, but it ended in the worst way possible. During the race, Ruffian pulled to the lead, as she always did. Suddenly, she slowed down as her right leg snapped in two. She continued to run, pounding the exposed bone into the ground. Vasquez tried desperately to slow her down. Surgery was done to set her destroyed leg, even though her veterinarian said she had less than a 10% chance of recovering. Ruffian began thrashing around after awakening from anesthesia, and she broke another leg. She was euthanized on July 7, 1975.


"It was one of the most incomplete, unsatisfying experiences that I've ever had. It was...the unfinished symphony of horse racing..." said Bill Nack, a journalist who covered Ruffian's races. "For me, it lost...the glow of romance that the sport had for me, since I was a kid."


Ruffian's entire body is buried at Belmont Park in New York, where she died. And she is facing the finish line.
Posted by The Elegant Astronaut at 5:45 PM