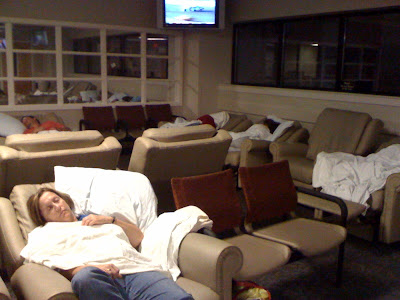 I don't know if there's anything that makes you feel as old as sitting in a hospital waiting room while your dad is in Intensive Care. I live 400 miles away from my parents, and I was quite startled to hear that my mother had called an ambulance for my father.

My parents aren't that old.
I didn't jump in my car as soon as I heard Dad was in trouble. I waited until he had gone through his emergency surgery to remove a blood clot from his leg. It wasn't until after his surgery that I learned he had been Med-Flighted from the small hospital in Fayetteville to a larger one in Huntsville. He needed a vascular surgeon, and Fayetteville didn't have one.

Posted by The Elegant Astronaut at 6:02 PM